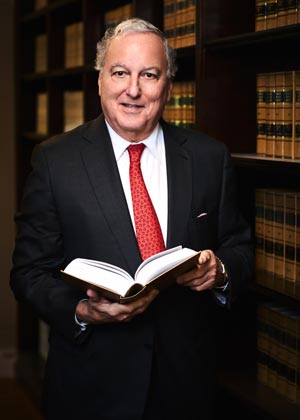 WILLIAM C. LANHAM, is a trial attorney specializing in professional negligence, wrongful death, aviation, railroad, product liability and related plaintiffs’ tort litigation. He was born in Tampa, Florida, and received B.A. and J.D. Degrees from the University of Alabama. He thereafter served with the Judge Advocate General’s Corps of the U.S. Army, where he tried approximately 120 general courts-martial, including the defense of two servicemen charged with atrocities allegedly committed during the infamous “My Lai Massacre.”

Member: Mr. Lanham holds membership in the State Bars of Alabama and Georgia, has served as Executive Vice President of the Georgia Trial Lawyers Association, and is a member of the Association of Trial Lawyers of America. He is a Fellow of the Lawyers Foundation of Georgia, has been selected as a Master in the Bleckley Inns of Court, and is admitted to practice before all Georgia state courts, the Fifth and Eleventh U.S. Circuit Courts of Appeal and the United States Supreme Court. He has written and lectured on tort related civil litigation for the Atlanta Bar Association, the American Bar Association, the Georgia Institutes of Continuing Legal Education and Continuing Judicial Education, and the Georgia Trial Lawyers Association. He has also lectured at the Melvin M. Belli Seminars and for the Bar Counsel of the U.S. District Court for the Northern District of Georgia, and has conducted litigation seminars at the Georgia State University College of Law. He presently serves as a member of the Northern District of Georgia Bar Council, which provides advice to the Federal Courts on Local Rules and operational issues of importance to the Court and Bar. He co-authored the topic, “Sample Settlement Brochures,” at 31 AmJur Trials 527. Mr. Lanham is a Fellow of the American College of Trial Lawyers, a Fellow of the International Society of Barristers and a Fellow of the International Academy of Trial Lawyers. He has been honored by inclusion in The Best Lawyers in America (Woodward/White, Inc., New York), since 1987, as well as his recent selection for inclusion in “Georgia Super Lawyers 2005” (www.SuperLawyers.com).